Steve Whitbread and Tom Hunt set out why the Environment Bill needs to be supported by effective information provision, and local-to-national integration.

Britain’s rich heritage of wildlife recording extends back to the heyday of natural history. Official support and actions in response to the provided opportunities remains patchy, however, even as recognition of the importance of environmental evidence, engaging volunteers and, lately, a green recovery has grown.

As just one example of the importance of voluntary effort at the national level (with thanks here to thousands of BTO members), bird trends have provided a cornerstone of UK monitoring from 1995’s first set of Sustainable Development Indicators2 (SDIs) through the whole of JNCC’s Biodiversity Indicators in Your Pocket (BIYP) series, from 2007 to the present.

It is a decidedly good thing that national monitoring occurs but, with a caveat for inevitable exceptions, three things are evident:

(1) The type of surveillance generally pursued at national level underlines a shared failure to effect positive change. In 25 years, the proposed life for an Environmental Improvement Plan, how far have we come even with farmland and woodland birds (Figure 1), let alone addressing wider biodiversity loss?

(2) The generally negative picture painted by many long running indicators (not just for birds) is magnified when specialised or more sensitive species and habitats or the condition of our most important sites are considered alone.

(3) The indicators, or the ways in which they are employed, are unsuited to the purpose of effecting and monitoring change to ensure that we know when, where and why it isn’t heading in the right direction, what works and what doesn’t. To be credible, national legislation, policies and initiatives, and local implementation mechanisms will need to address these points.

The need for improved understanding and better use of species, habitat and other data at national level and the causes and direction of change is part of what inspired the formation of the State of Nature Partnership and its use of new methodologies, with the partnership expanding to include the UK’s official conservation advisers for the 2019 report. The approaches here could well be expanded for local UK and UK monitoring purposes and it is great to see the adoption of SoN metrics via the BIYP Priority Species indicator and for Our Green Future.

Discussion of potential 25 YEP SDIs has seemed skewed towards data already available rather than to positive outcomes. Although it would seem to be a good thing to have targets and milestones with which to encourage and celebrate progress, e.g. with the Nature Recovery Network rather looking back to how many moths, hedgehogs, skylarks and ancient trees there were in the 1970s, serial target failure in 2010 and 2020 appears to led to a disinclination to set goals rather than to use information to achieve more. Care is also needed in interpretation (e.g. the removal of greenhouse gases by UK forests).

The E1 ‘Biodiversity Data for Decision Making’ was added in 2019.

It would be a decidedly good thing to have (a) a true measure of this and, more importantly, of the extent to which (b) data are available to guide decision making for different purposes and (c) are actually used for such purposes, nationally and locally. Not least so that the important gaps in provision, access and use could be addressed

However, what this actually comprises are the cumulative number of records (E1a), and number of publicly accessible records at 1 km2 resolution or better (E1b) made available via the NBN Gateway in 2004-2017 and subsequently via the NBN Atlas. 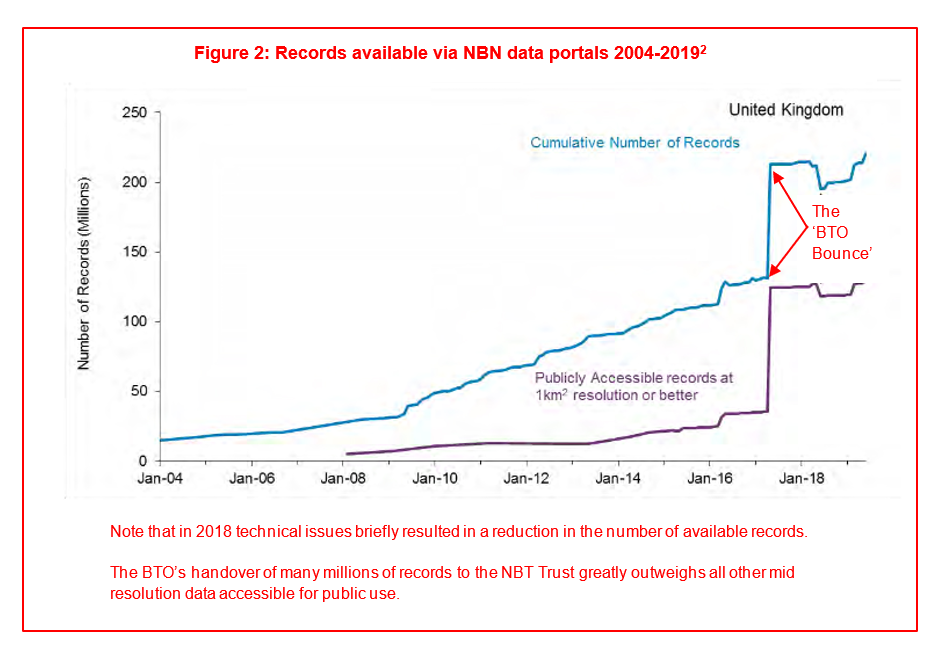 The E1a-E1b gap reflects the Trust’s need to be able to work with a broad mix of data partners. There is a whole side story here, but for a number of understandable and entirely justifiable reasons, not all but most of which relate ultimately to resource issues, many organisations have chosen not to make their data fully accessible or even to share it to the Atlas system at all.

The graph misleads in another way. Exciting though it can be to see Charles Darwin or Derek Ratcliffe’s name against a particular historic observation or even (archaeological) evidence of hippopotami on the Thames, data for today’s decision-making, have a rather more limited shelf life.

Questions you might want to pose include ‘How many records in Figure 2 actually come from this millennium?’ or (recognising that the graph data only extend to May 2019) ‘Given the Government’s promise on the state of the natural environment, how many extra records, has it been possible to gather collect, check and make available via the NBN Atlas since January 2018?’

Although the Natural Environment White Paper, valued recorders’ voluntary efforts at £50M p.a., year-on-year cuts mean public investment in biodiversity is at pre-2004 levels of support. Since survey and monitoring work account for a fraction of this, ‘rather fewer than necessary’ is the likely answer; even taking account of the statistical methods employed by UK CEH in support of the SoN Reports.

Nationally then, we appear to be a long way from where we need to be to be able to join the dots.

Whereas policies are made in Whitehall (albeit with some steer from other interested parties), it will be the collective choices and actions of individuals and local councils, communities, businesses and groups that largely determine the extent to which nature and natural capital will recover or continue the oft-reported declines.

In this respect, perhaps the most significant Environment Bill initiative not drawn from the 25 Year Plan will be the introduction of Local Nature Recovery Strategy (LNRS) areas. The LNRS network will help deliver and support the ‘national’ Nature Recovery Network, with the new Environmental Land Management scheme to be administered on the same spatial basis.

Accordingly, provided key components are in place (Box 1) the LNRS network should:

However, the inadequacy of ‘to have regard to’ obligations - amply illustrated by the at-last- to-be-reinforced NERC Act Section 40 Biodiversity Duty on Public Bodies – makes this uncertain. Appropriate statutory force will be a necessity not an option. 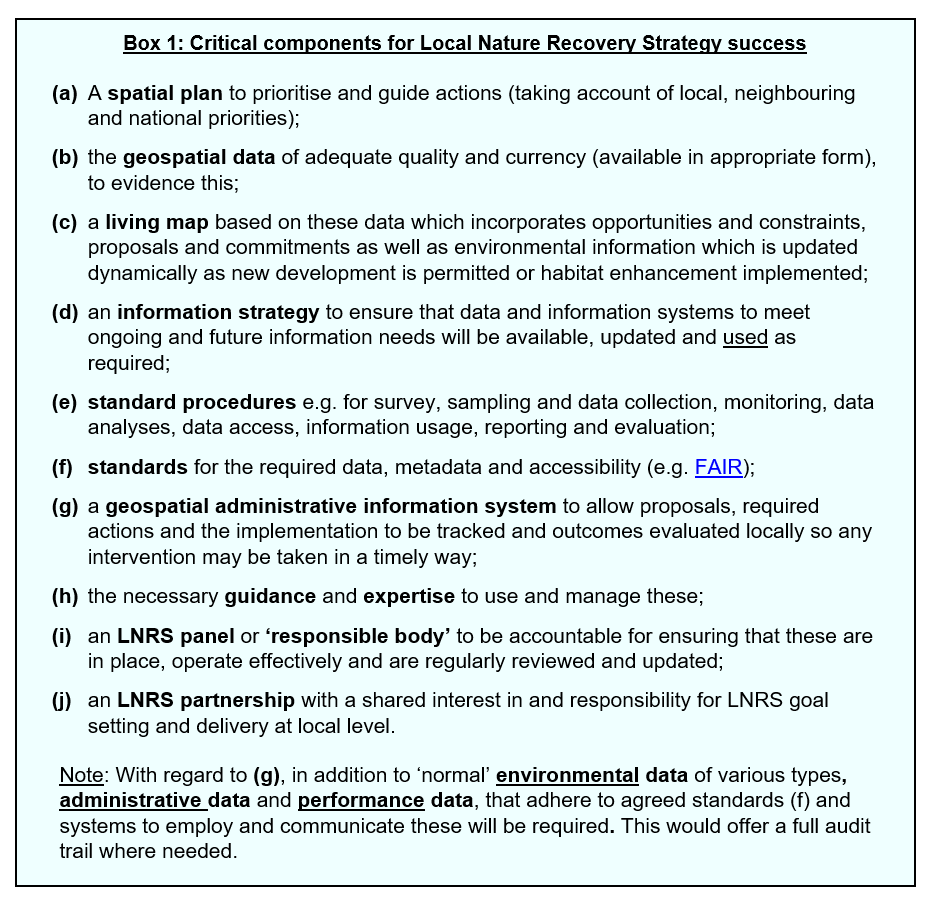 This would seem to be likely to support the Government’s environmental aspirations as echoed by Michael Gove and George Eustice, and the goals outlined in last week’s Planning for the Future white paper which also seeks to digitise aspects of the planning process – provided a number of issues are addressed and necessary measures implemented (Box 2). 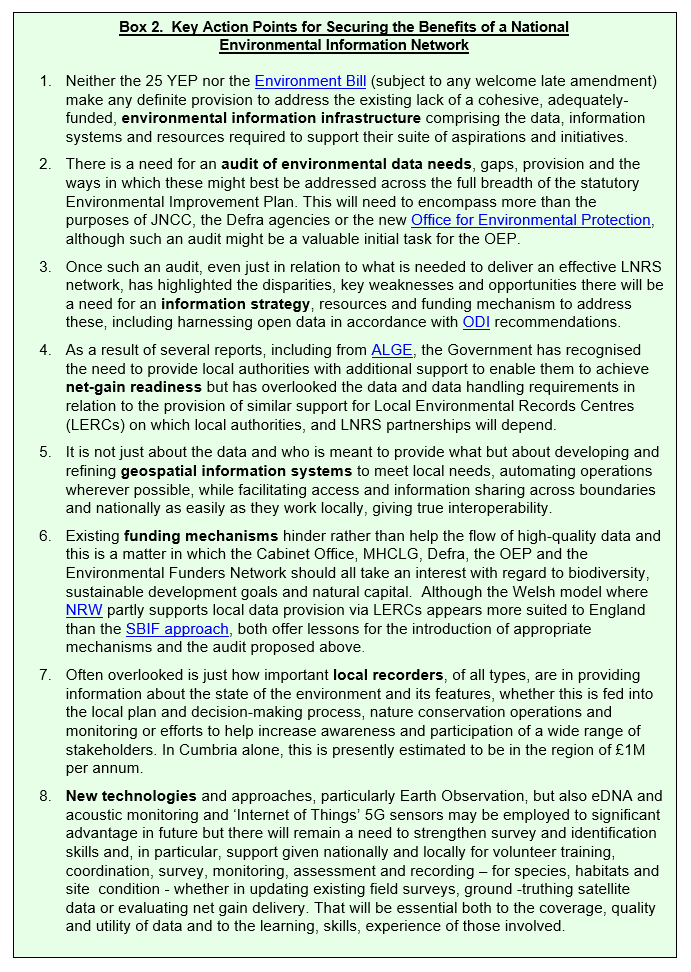 In the wake of ALERC’s Biodiversity Net Gain document, a number of LERCs, e.g. TVERC are gearing up for the changes to be introduced by the Environment Bill, with others, e.g. WBRC well ahead of the game. As well as meeting local information user and recording group support needs, the LERC network will be seeking to support national priority setting, reporting and evaluation, and supporting individual centres’ development for this purpose.

Although it will be a little more than two years before biodiversity net gain becomes mandatory - with tools such as the Biodiversity Metric gradually being refined – or the new ELM system is introduced, it is critical that there be broad and open discussion about the required information systems, and how these will be developed, implemented and integrated in support of local to national needs, with particular emphasis on the LNRS network. To date there appears to have been little opportunity to examine how the various Environment Bill initiatives might all work together effectively. Discussions seem to be about Defra’s IT and national portals rather than with those organisations on whose activities the success of those programmes depend and the adequacy of national data sets. This seems to represent a failure to learn from the past – another reason for an audit against information needs.

It seems reasonable to suggest that an efficient, cost-effective, standard-compliant approach that facilitates activities including monitoring and reporting rather than becoming another burden is more likely to be supported and therefore succeed, especially where official support cannot be relied on in the long term or, as with BARS (the Biodiversity Action Reporting System), a tool provided more for central data gathering rather than as a help to support its users is liable to be rejected. The decisions taken in this area will be critical

‘Doing Data Right’ at local level, taking account of the above, will not only mean effective local delivery, a well-coordinated LNRS and getting the best out of net gain opportunities and ELM, but doing so in a way that will provide effective evaluation, credible indicators and, lasting, positive change, nationally.

To echo the Secretary of State who introduced Our Green Future, ‘If not now, when’?