Patrick Holden, Founding Director of the Sustainable Food Trust, discusses rewilding the soil, and how this should be a priority for restoring both soil biodiversity and the soil carbon bank.

Everyone is talking about rewilding these days but, in relation to agriculture, our most important priority should be to rewild the soil. I say this because in terms of soil biodiversity, there has been a mass extinction of soil life taking place throughout my farming lifetime, due to the more or less universal adoption of the use of chemical fertilisers, pesticides, fungicides and herbicides. In combination, they have had an absolutely devastating effect, not only on soil biology, but also in depleting its carbon bank.

Whilst it used to be true that much of the world was covered with pristine wilderness such as rainforest, because we’ve destroyed so much of that habitat most of the habitable surface of planet Earth is now farmed, so farms are the real front line of the battle to restore lost biodiversity.

Until now the conservation organisations have been great promoters of the concept of stewardship, a kind of ‘land sparing’ approach, yet as successive ‘state of nature’ reports have demonstrated, stewardship solutions around the edge of otherwise intensively farmed soils have completely failed to reverse the relentless decline in biodiversity that we’ve witnessed over the last 50 years and more.

So if a ‘Noah’s Ark’ approach won’t work, this gives rise to a question – how could we best replenish the soil carbon bank whilst at the same time maintaining sufficient food production to feed the human population? We believe that this could be achieved through rewilding the soil - switching all the farming systems of the world to sustainable and regenerative methods of food production could be the basis of an approach which could allow food production to coexist with soil health and biodiversity.

Many people are unaware that in terms of carbon storage, the soil is only second to the oceans as a carbon sink. Yet during the chapter of industrial agriculture, soil carbon stocks have been dramatically depleted, so much so that many scientists are now predicting that we have less than 50 harvests left before the soil fertility reaches such critically low levels that maintaining reliable yields of our staple crops is no longer possible.

In response to this challenge, the ‘land sparers’ are of the opinion that if we further intensify food production on the world’s best soils, then we can make room for more rewilding on the remaining area. In my opinion, this is quite literally not a sustainable solution. I say this because it will entail further use of polluting and non-renewable chemical inputs as well as continuing degradation of the fertility of the very soils we need to regenerate.

I have been a practitioner of so called land sharing over more than 40 years. This approach entails a return to farming systems which work in harmony with nature, avoiding the use of chemicals, and using crop rotations which include a fertility-building phase of grass and legumes to replenish the lost carbon, normally turned into food through grazing livestock, followed by a succession of arable crops including grains and vegetables to complete the cycle. This biological system of food production, commonly known as mixed farming, can be remarkably productive and it has the compelling advantage of combining sustainable food production with soil building.

The alternative chemical approach, often referred to as sustainable intensification, (which I regard as an oxymoron, unless it is based on biological principles), will only continue to deplete the precious diverse community of soil micro-organisms and invertebrates that form the base of the back biodiversity pyramid, as well as reducing soil carbon stocks.

Whilst on this subject of soil, let me debunk another myth: namely that it takes decades or even perhaps hundreds of years to build an inch of fertile topsoil. This may be true in nature, but under the right regenerative farming system, I have become convinced from my own direct experience that it is possible to speed up the processes, not just of increasing soil organic matter but actually building soil.

The key management tool is known as holistic or mob grazing, the practice of intensively grazing cattle or sheep on a small area of pasture for 24-48 hours before moving on to fresh grass, thus mimicking the activities of herds of wild ruminants who grazed in vast herds for safety, during which they urinated, defecated and trampled the grasslands, the combination of which actually builds soil. It’s time to bring farmers and scientists together to further evidence the brilliant capacity of holistic graziers to restore soils to health build soil carbon

So let us hope that these messages and practices can find a wider audience and acceptance. They hold one of the best ways in which we can re-sequester sufficient carbon from the atmosphere to avoid irreversible climate change. Defra need to be mindful of these simple principles, upon which soil fertility is built and the prosperity of civilisation depends, in-designing post-Brexit farm policy measures.

Patrick Holden is Founding Director of the Sustainable Food Trust. 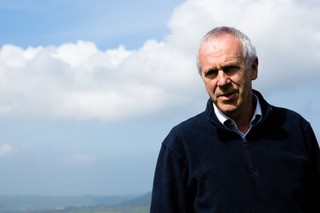